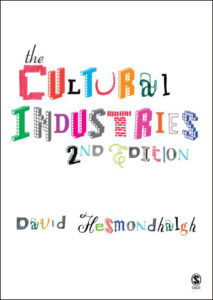 Hesmondhalgh chooses to use the term “symbol creators” instead of “artists” to label the creators of cultural texts, which might be “films, TV series, comics, music, video games, and so on” (2012 p. 3). He also makes reference to informational texts (“newspapers, broadcast news programmes, documentaries, and analytical books” (2012 p. 4).

The cultural industries have always been in competition with (and yet often also in collaboration with) other neighbouring sets of industries. The most notable historically have been the telecommunications and consumer electronics industries. The information technology industries have now joined this group of interlinked industries. The development of the internet and the web, and the entry of IT firms into cultural markets, has certainly brought about considerable change in the everyday cultural experiences of billions of people (2012 p. 4).

Why the cultural industries matter:

The importance of the cultural industries in modern societies rests on three related elements: their ability to make and circulate products that influence our knowledge, understanding and experience (texts); their role as systems for the management of creativity and knowledge; and their effects as agents of economic, social and cultural change (2012 p. 4).

Films, TV series, comics, music, video games and so on provide us with recurring representations of the world and so act as a kind of reporting. Just as crucially, they draw on and help to constitute our inner, private lives and our public selves: our fantasies, emotions and identities (2012 p. 4).

They shape our sense of how we might live together in modern societies, of how democracy, justice and rights might operate. They are the way in which we come to form our opinions about the rights and wrongs of consumerism, and the prospects for the future of the planet. For these reasons, the products of the cultural industries are more than just a way of passing time – a mere diversion from other, more worthwhile things (2012 p. 5).

Importantly, most texts that we consume are circulated by powerful corporations (2012 p. 5).

In societies where the cultural industries are big business, cultural industry companies tend to support conditions in which large companies and their political allies can make money: conditions where there is constant demand for new products, minimal regulation by the state outside of general competition law, relative political and economic stability, workforces that are willing to work hard and so on. Yet, in contemporary societies, many of the texts produced and disseminated by the cultural industries do not simply support such conditions. Very often (not just occasionally) they tend to orientate their audiences towards ways of thinking that do not coincide with the interests of capitalism or of structured domination by men over women or institutional racism (2012 p. 5).

The invention and/or performance of stories, songs, images, poems, jokes and so on, in no matter what technological form, involves a particular type of creativity – the manipulation of symbols for the purposes of entertainment, information and perhaps even enlightenment. Instead of the term ‘art’, with all its connotations of individual genius and a higher calling, I want to use the more cumbersome term symbolic creativity and, instead of the term ‘artists’, I prefer the phrase symbol creators or symbol makers for those who make up, interpret or rework stories, songs, images and so on. This is a more inclusive term, and that means it also incorporates the work of those involved in the production and sharing of knowledge as well as of art and entertainment.

At this point, the scope of “symbol creator” seems uncertain. He seems focused primarily on authors, musicians, and film makers, but it’s unclear if, say, an editor, a sound engineer, or a key grip would be considered symbol creators. This seems important in gaming, where dev teams can number in the hundreds of employees, each with specialized contributions to the whole. Some clarification comes further below.

He takes a less romantic view of symbol creators than some others: “Symbolic creativity can enrich people’s lives, but often it is banal or mediocre (2012 p. 7).”

Here’s an extended quote which can be used to see how game dev aligns with Hesmondhalgh’s concept of a cultural industry:

The way the cultural industries organise and circulate symbolic creativity reflects the extreme inequalities and injustices (along class, gender, ethnic and other lines) apparent in contemporary capitalist societies. There are vast inequalities in access to the cultural industries – and these persist in the era of digitalisation. Those who succeed in having their work circulated widely are often treated shabbily and many people who want to create texts struggle to earn a living. Failure is far more common than success. There are great pressures to produce certain kinds of texts rather than others and it is hard to come across information about the existence of organisations and texts that attempt to do things differently. Some types of text are made much more available than others. These are bleak features of the cultural industry landscape, yet, because original and distinctive symbolic creativity is at a premium, the cultural industries can never quite control it. Owners and executives make concessions to symbol creators by granting them far more autonomy (self-determination) than they would to workers of equivalent status in other industries and to most workers historically (2012 p 8).

A definition of cultural industries:

The cultural industries are difficult to define, and many researchers have demonstrated great confusion in trying to do so. One vital step is to take the concept of culture seriously.
If we define culture, in the broadest anthropological sense as a ‘”whole way of life” of a distinct people or other social group’ (Williams, 1981: 11), it is possible to argue that all industries are cultural industries in that they are involved in the production and consumption of culture. For by this definition, the clothes we wear, the furniture in our houses and workplaces, the cars, buses and trains we use for transport, the food and drink we consume are all part of our culture and they are nearly all produced industrially, for profit.
The term ‘cultural industries’ has tended to be used in a much more restricted way than this, based implicitly on a definition of culture as ‘the signifying system through which necessarily (though among other means) a social order is communicated, reproduced, experienced and explored’ (Williams, 1981: 13, original emphasis). To put this a little more simply, the cultural industries have usually been thought of as those institutions (mainly profit-making companies, but also state organisations and non-profit organisations) that are most directly involved in the production of social meaning (2012 p. 16).

Every car involves significant design and marketing inputs. However, the primary aim of cars as a category is not to provide a set of meanings to customers, or to look nice, but transport. […] Texts (songs, narratives, performances) are heavy on signification and tend to be light on functionality and they are created with communicative goals primarily in mind. […] They are cultural industries because they deal primarily with the industrial production and circulation of texts (p. 16).

Hesmondhalgh lists “video and computer games or digital games” among the core cultural industries, which “are centrally concerned with the industrial production and circulation of texts.

It would help my work if I could find some industry segments that parallel the games/IT relationship:
digital games : IT development :: cultural industry segment :: larger industry

In my mind, while considering electronic publishing and web design, the relationship is

It might be hard to find super-industries of those others which have non-cultural sub-industries. At Real, we provided streaming services to content creators, but it seems that

Hesmondhalgh would seem to consider designers to be “above the line” symbol creators and developers to be “below the line”:

Another objection to the focus on symbol creators is that it marginalises the importance of other cultural workers. In its accounting practices, Hollywood traditionally differentiated ‘above the line’ workers (symbol creators) from ‘below the line’ craft and technical workers. Some have implied that ‘above the line’ workers are privileged, perhaps even ‘bourgeois’ while ‘below the line’ craft and technical workers suffer by comparison, and therefore to focus on symbol creators is to reproduce a version of class inequality (Mayer, 2011). But the situation is more complex than this. Many symbol creators are under-rewarded, under-employed, oppressed and exploited, and many un-named technical workers face relatively good conditions – partly because they tend more often to be unionised. The reason for the focus on symbolic creativity does not derive from any desire on my part to highlight a pampered creative elite and ignore oppressed technical and unskilled workers. It is based on the decision to understand conditions of cultural work in relation to the particular nature of that work, as the production of culture. In Raymond Williams’s words, a sociological understanding of culture must concern itself with ‘the social relations of its specific means of production’ and ‘with the ways in which, within social life, “culture” and “cultural production” are socially identified and distinguished’ (Williams, 1981: 30-1). Objections to definitions of the cultural industries based on symbol making need to address debates about the definition and importance of culture in modern societies (2012 p. 21).

Hesmondhalgh offers terms he opted against. I should keep them in mind as I try to frame my research, and keep an eye out for them as possible alternate terms.

The most intriguing for an iSchool student is “Information Industries”:

The term “information industry” was in vogue during the late 1980s and 1990s (see Sadler, 1997, for an interesting analysis of the recording industry as an information industry), but even some of those who used it (such as Wasko, 1994) recognised that it marginalised entertainment and the artistic, expressive and cultural aspects of symbol making. See Schiller (1994) for a discussion of the relationship between information and culture (p. 15).

The term “cultural industry” was supposed to be shocking when coined:

The concept of cultural industries has its origins in a chapter by two German Jewish philosophers associated with the Frankfurt School of Critical Theory, Theodor Adorno and Max Horkheimer (1977[1944]). Although the term may have been used before, ‘The Culture Industry’ was part of the title of a chapter in their book Dialektik der Aufkliirung (Dialectic of Enlightenment), which they wrote in the USA in the 1940s while in exile from Nazi Germany. The book was born out of a conviction that life in the capitalist democracy of the USA was, in its own way, as empty and superficial, if not quite as brutal and horrific, as life in the Germany they had fled. ‘Culture Industry’ was a concept intended to shock. Adorno and Horkheimer, like many other users of the term ‘culture’ in the nineteenth and twentieth centuries, equated culture in its ideal state with art, with special, exceptional forms of human creativity. For them, and for the tradition of Hegelian philosophy of which they were a part, art could act as a form of critique of the rest of life and provide a utopian vision of how a better life might be possible. In Adorno and Horkheimer’ s view, however, culture had almost entirely lost this capacity to act as utopian critique because it had become commodified – a thing to be bought and sold. Culture and Industry were supposed, in their view, to be opposites but, in modem capitalist democracy, the two had collapsed together (2012 p. 24).

Miege argued that the introduction of industrialisation and new technologies into cultural production did indeed lead to increasing commodification, but that it also led to exciting new directions and innovations. The commodification of culture, then, was a much more ambivalent process than was allowed for by Adorno and Horkheimer’ s cultural pessimism (2012 p. 25).

The key words, to repeat, are complex, ambivalent and contested. These terms drive my efforts to explain and assess the cultural industries in what follows. Using the term ‘cultural industries’ signals not only an awareness of the problems of the industrialisation of culture, but also a refusal to simplify assessment and explanation (2012 p. 25).