Wasko, J. (1994). Hollywood in the Information Age : Beyond the Silver Screen. Cambridge: Polity. 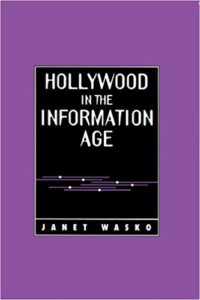 I ordered this up from the UW library based on a citation in Hesmondlagh 2007. After skimming parts, I don’t think it’ll be immediately useful to my studies. Published in 1994, it can provide some historical perspective on video entertainment adapting to changes in information technologies, and I may be able to use it for that purpose later. Unfortunately, it predates streaming services, and with chapter titles like “The Wired Nation and the Electronic Superhighway: Cable Television, Pay Cable, Pay-Per-View and Beyond”, I feel like I should skip to something more “beyond” for now.

It’s not precisely the same topic, but I’m going to check this out, which I found while looking at Dr. Wasko, who is apparently a chapter author.