Some excerpts and notes/questions for future reading/study.

Since 1978, we have been working on a methodological approach […] which is primarily concerned with the development of software as an adequate tool for users.

This seems like a good summary of the ultimate value in the German’s methodological approach. So, what is game dev primarily concerned with? Because it’s not the development of software as an adequate tool for users. How might game developers summarize the ultimate value embodied in their approach?

Not all developers utilizing an approach need to agree that they are. The Scandinavian Approach might involve shared values among a group of developers. I need to read more Burke and Stets to learn more about exactly where values enter the various types of identities. Carter & Grover only specifically mention “values” for personal identities.

factors deeply rooted in the history of this region would have to be systematically followed up to the present time in order to show (a) how the background against which computer technology emerged in Scandinavia was, from the outset, different from that in other countries and (b) how distinct social mechanisms were at work, influencing the practical implementation of this technology.

what the various Scandinavian schools have in common are the values shared by the system developers there. For them, humanization and democratization are overriding goals, which are given much greater attention in designing computer-based systems than elsewhere. These goals have given rise to distinct scientific and methodological endeavors….

conflicts involving differing views and sometimes contrary convictions are voiced, argued out, and in some cases actually overcome, in an atmosphere of mutual respect and by maintaining an overriding will to cooperate.

While a “gamer” identity may be a newer phenomenon than “Scandanavian,” I think this implies that gamer culture could be affecting the software that emerges from it. Given that most gameworkers are also gamers, one can ask how gamer values affect gameworker processes. Also, how conflicts are resolved among gamers if their values don’t happen to involve mutual respect, but (speculating here) showing mastery of game systems and other “players” in the dev process.

Unlike the prevalent form of computer science, whose development has been strongly shaped by the United States and the military interests dominant there, the Scandinavian Approach has been largely shaped by nonmilitary needs and is explicitly geared to the use of computers for the benefit of human beings, in pursuance of the overriding goals of humanization and democratization.

Is “game dev culture” rooted in the US-military-computer-science approach? If not, what is it? Is it geared to uses for the benefit of human beings in the Scandinavian sense, or is it geared to something else? 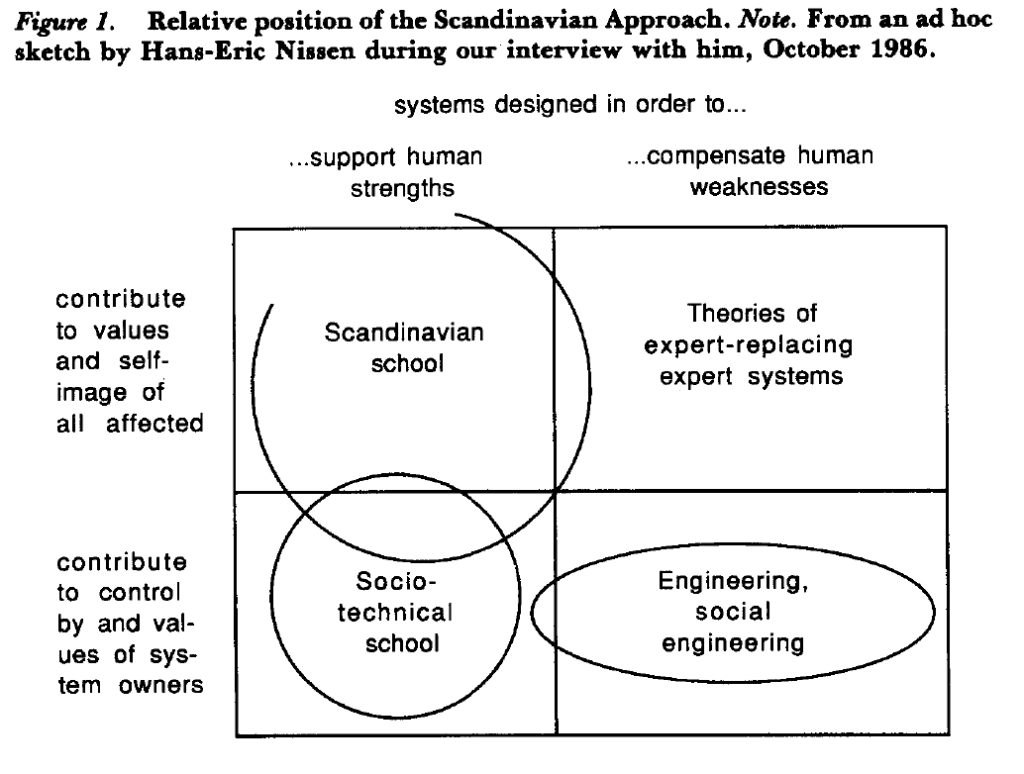 One Reply to “Floyd 1989: Scandinavian Approach”