IT identity (Carter & Grover, 2015) is conceived as a new form of material identity. My studies are taking aim at the way in which software workers’ identification with their product affects risk in their projects. These seem like good reasons to dig into material identities. Carter & Grover reference Dittmar (2001), so I looked to Dittmar’s work which also includes a book on consumer culture, identity, and well-being (Dittmar, 2008a-c).

Like role and person identities, material identities focus attention on individual thinking and behavior rather than on group processes and intergroup relations and, as recent work suggests, are constructed in the same way (Dittmar 2011). Therefore, to develop a conceptual definition of IT identity as a new form of material identity, we first outline and then build on general properties of identities at the individual level. (p. 933.)

Material identities are verified when individuals are able to exercise control over, and mastery of, a material object with which they are interacting (Dittmar 2011). (p. 933.)

…as a material object, IT is so bound up in the ways people use identities that, for many, these technologies are an integral part of how they come to know themselves and act (Floridi 2010). In today’s digital world, with its emphasis on immediate access to information, institutions, and people, it seems reasonable to think of IT as a source of reflexivity that gives rise to the question, “Who am I, in relation to this technology?” (p. 334.)

Research points to a fundamental need that people have to expand the self in that “they seek to enhance their potential efficacy by increasing physical and social resources, perspectives, and identities that facilitate achievement of any [personal] goal that might arise” (Aron et al. 2003, p. 478). One way people achieve this is by incorporating capabilities afforded by material objects to which they have become emotionally attached into their individual self-concepts (Belk 1988). (p. 940.)

While examining these functions, it seems important to acknowledge the distinction between the technology being developed and the classes of existing technology into which it falls. If someone is working on the latest iPhone, are they identifying with their own work product or the line of iPhones that have come before?

Each function seems to apply to software projects.

Some quotes I pulled that still need processing:

“Consuming passions” are important drivers, where people buy goods in attempts to make themselves feel better and move closer to an ideal identity, which can crowd out “reational” concerns with how much the goods cost and whether they serve a practical purpose (Dittmar, 2008c, p. 4).

A “material self” was identified early on in William James’s Principles of Psychology, first published in 1890, where a person’s identity is extended beyond the physical boundaries of the body to include material goods (Dittmar, 2008c, p. 8).

If the mere ownership effect occurs because of people’s desire to maintain a positive self image, where they enhance what they own in order to enhance themselves, then they should display a stronger mere ownership effect after receiving feedback that they have failed, rather than succeeded in, a particular task. Indeed, when people failed to solve an anagram they evaluated the drink cooler as more attractive when I owned it than when they did not. If an object as trivial as a drink cooler can trigger the mere ownership effect, bolstering self-image for material possessions is bound to be more pronounced with goods of greater symbolic and personal significance (Dittmar, 2008c, p. 30).

If we use positions for defining, extending, and evaluating the self, it would follow that their unintended pass should be experienced as a lessening of self. This would suggest that being a victim of a property crime might involve rather more psychological trauma and is often credited to the loss of “mere things” (Dittmar, 2008c, p. 30-31).

Individuals perceive and experience material possessions as integral parts of their self, which shows that identity has boundaries that extend beyond the physical body. Psychological explanations of this close link between possessions and self fall into two broad camps. On the one hand, there instrumental functions are emphasized, particularly that they help people exert control over their environment and experience a sense of mastery. On the other hand, their symbolic functions are highlighted, where material objects can represent interpersonal relationships, emotional comfort, group belongingness, and a range of personal characteristics, values, and beliefs (Dittmar, 2008c, p. 31).

Typical instrumental possessions include tools or means of transport. Symbolic possessions can be subdivided further into symbols of the historical community of self (e.g. photographs), expressions of artistic or intellectual interests (e.g. book collections), and signs of status or wealth (e.g. yacht) (Dittmar, 2008c, p. 33).

A comparison of elderly women who lived at home, in sheltered apartments that they furnished themselves, or in a traditional nursing home, revealed differences related to their identity depending on the extent to which their possessions symbolised parts of their self, embodying memories of people, times, and places (Cram & Patton, 1993). Wapner, Demick, and Redondo (1990) investigated directly how well elderly people fared in different nursing homes in the US and found that those who kept their cherished possessions coped much better. They felt more in control, less helpless, more supported by staff, and were judged to be better able to resolve conflicts (Dittmar, 2008c, p. 34-35).

Dittmar & Kapur (2011) include confirmatory factor analysis (CFA) of items for four different buying motives, two of which directly relate to my work.  I’m extracting the text of the questions and including an image of the full table with loadings. 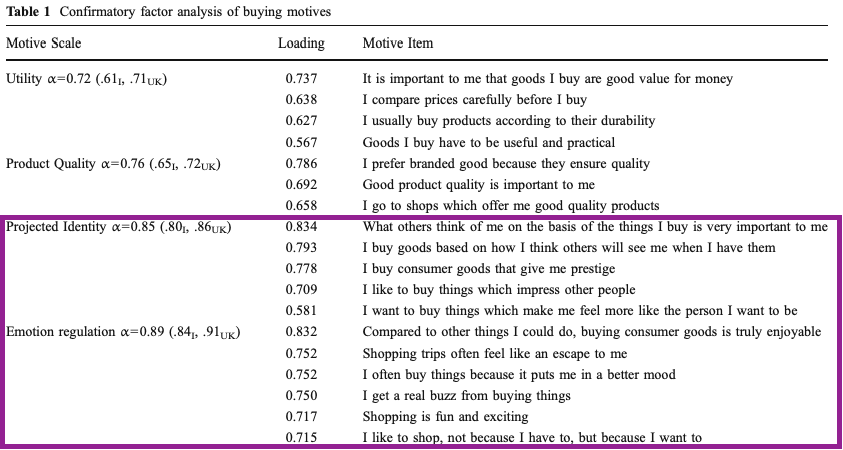 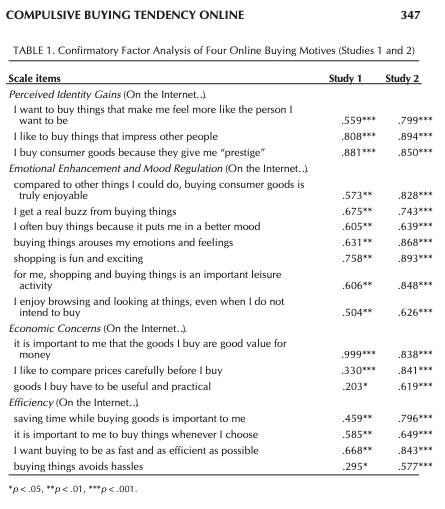